Ancient Suzdal (founded 1024) and Vladimir (founded 1108) are considered true gems of the ancient Russian architecture. Winter presents a unique opportunity to witness these masterpieces of architecture and medieval art in a very authentic way, similarly to how they appeared to the visitors 500 years ago.

What strikes the visitor is the absolute pureness of snow, which can hardly be seen like this anywhere else in an urban environment. The white background creates an atmosphere which highlights all the ancient spiritual treasures. Suzdal has been the centre of the Rostov principality since 1125 and Vladimir – from 1157. Vladimir becomes the capital of Medieval Russia under Vsevolod the Big Nest (1154-1212) before being conquered and destroyed by the Mongols in 1238. This period brought the further partitioning of the Great Vladimir principality divided into 11 smaller principalities of Moscow, Tver, Pereslavl, Rostov, Yaroslavl, Uglich, Belozersk, Kostroma, Nizhny Novgorod, Starodub-upon-Klyazm and Yuriev Polsky.

I didn’t expect that 17th century frescoes of Gury Nikitin in Spaso-Efimievsky Monastery in Suzdal will make such a strong impression on me. The frescoes cover the whole of the cathedral’s interior and truly impress the visitor with their reds, blues and the ochres painted by Nikitin (1620-1691), the strong compositions and the confirmation that one of the strongest European art traditions has been quietly developing in the North-East of European Russia, drawing its inspiration from earlier masters Teophanes the Greek (1340-1410) working in Novgorod, Andrey Rublev (1360-1430), working in Vladimir and Dionisius (1440 – 1502) who painted the interiors of the Ferapontov Monastery. 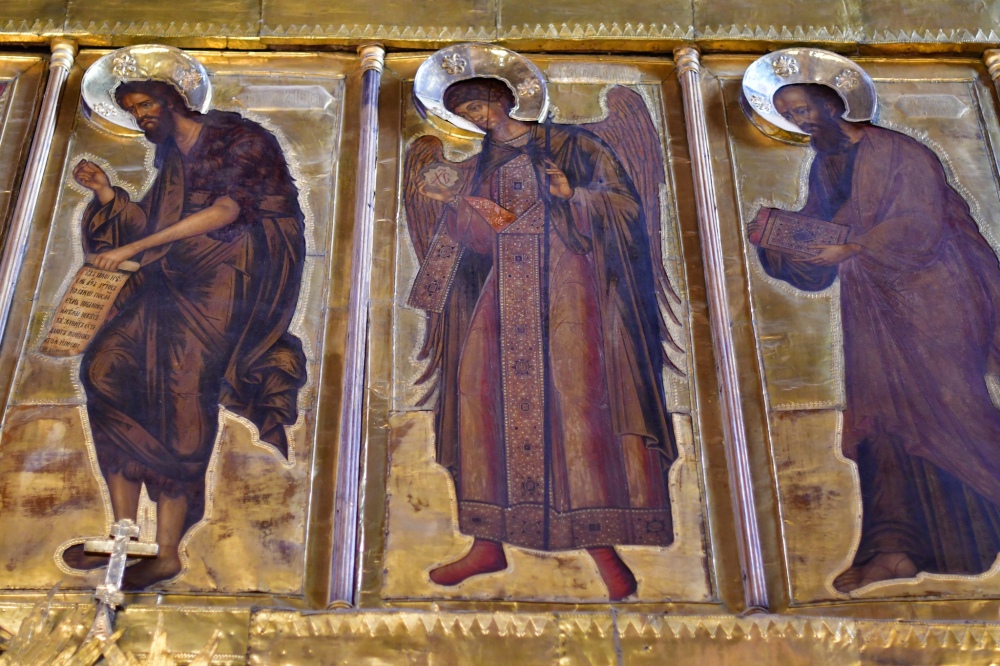 The experience of Suzdal Kremlin and the Cathedral of the Nativity of the Theotokos could be illustrated by this image of the Iconostasis of the main cathedral of Suzdal dating from the 17th century. The frescoes surrounding the visitor and the very large icons painted in the 17th century create a unique atmosphere.  The cathedral has been included in the UNESCO World Heritage in 1992. A truly outstanding experience, highly recommended to anyone who is interested in medieval art and history.