Now that our ‘Ecosystems’ album has been published and launched it would be wise to look back at the long and tricky process of its design, photography and final compilation to see which lessons can be learned from it.

It should be said right at the start that this project would never have materialized in the way it did, had it not been for the fruitful collaboration with the University of Reading that I was able to forge. The book has become a graduation project for the BA in Graphic Design and Communication students.

The initial stages of the project involved a lot of brainstorming and a clear realization that telling the story of ecosystems in images will not only be possible but also highly desirable given the urgency of the situation where 60% of all global biodiversity has been lost since 1970.

Having been exposed to various approaches to account for so called ecosystems services, I realized early on during my time as a consultant to IUCN that money cannot possibly be a measuring rod for assessing the value of ecosystems. There are several reasons for this. First, the potential value function is definitely not-linear for if there is no oxygen supply, there is nobody to calculate the value of ecosystems. This simple example illustrates the fact that oxygen supply should be at the very list multiplied not added to the other components.

Other reasons include a wonderful comment made in one of the blogs: ‘see the price – look for the buyer’. In other words, the moment you monetized the value of nature – wait to see that somebody offers a higher price for destroying it. It is quite plausible to imagine that monetary estimates will be used as maximum damage estimates in cases environmental deterioration has taken place due to resource extraction e.g. in African or South American national parks.

The image selection and sequencing was a difficult task and I had to resort to inspiration from Gerry Badger’s writing on the subject and thought about creating filmic sequences inspired by Eisenstein. In the end it took very detailed discussions to establish which images fitted and which did not and I am glad that we had that opportunity to discuss and compare various options.

One important aspects was to establish a working collaboration with the author of introductory articles, Dr Joachim Spangenberg, who is an ecological economist like me, but also had a degree in biology, which put him in a very strong position to tell the story of each ecosystem service in a scientifically rigorous but still accessible way. Joachim did a wonderful job, and I am very grateful for this input. Only one of the articles focused on aesthetic values needed a second look because we thought that a less-Eurocentric view would be in fact beneficial. Many leading environmentalists supported the project and having seen an early draft online contributed their endorsements that could be seen on the dust jacket.

Writing the texts, designing the book and sequencing the images wasn’t everything that needed to be done because I realized that we almost forgotten to design the hard cover and the dust jacket needed some further refinement making the letters on the spine larger. In the end I have chosen the pink – the colour of the season for the hard cover made of cloth with silver debossed letters seen below. 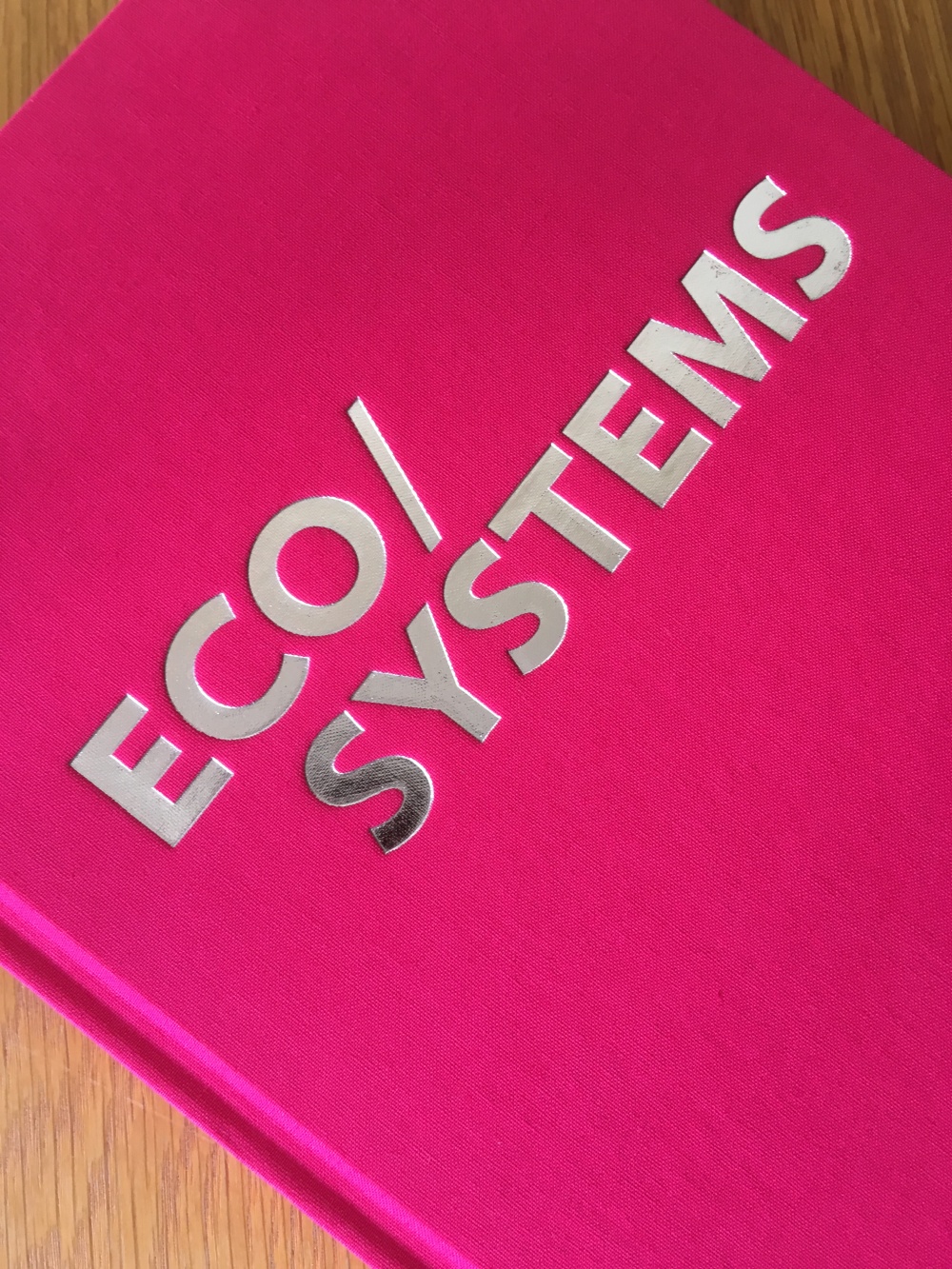 But how to distribute the book? The major book chains requested a 40% discount and one of them immediately started undercutting us on Amazon by offering the book at a lower price than we actually set. This had to be stopped of course.

It was decided to focus on the mixed strategy whereby a set of Amazon book pages would advertise the book for the US, Canadian, UK, French, German, Spanish and Italian audiences. At the same time the artist website offered to order the book directly. We also made the book available at major fairs and conferences, including UNFCCC COP24 United Nations Conference on Climate Change in Poland, where the book has had a lot of success. I continue talking about the book at the various lectures that I have just given at the Union of Architects in St Petersburg and the Rethinking Economics conference at the Erasmus University of Rotterdam. One also needs to think about ways to make the Ecosystems exhibition a travelling show so that it could be enjoyed by the public in other countries just like it was providing inspiration at the Mathematical Institute of Oxford University.

Several days ago, I received an email from one of the students who saw the exhibition saying that it resonated with them so much, they decided to go on an expedition to focus considerable time on studying a particular ecosystem in-depth and combine the scientific approach with experiential learning of the Goethean tradition. There truly cannot be a higher praise than this. So I am happy.